5 Ways For A Great Myrtle Beach Vacation For Less

If you’re thinking about heading to Myrtle Beach for a vacation but are worried about how you’ll entertain the family on a budget, we’ve got some tips for you. You can keep costs down if you know how to tap into beach bargains. There are great musical acts, magic shows, and more for free. You can even stay in a big condo with great amenities for a fraction of what you’d pay for a small oceanfront hotel room. Here are five ways you can have a great Myrtle Beach vacation for less: Stay at a golf resort instead of a beachfront hotel— You get double the space for half the money when you rent a big, roomy condo in a golf resort minutes from the beach. There are many golf resorts in the area like the Village at the Glens in Little River. A five-minute drive to the beach, it’s uncrowded in summer, has a big pool, and grilling areas for picnics. There’s an added bonus if you’re a golfer — discounted green fees. [caption id="attachment_4312" align="aligncenter" width="320"]

Village at the Glens[/caption] Stay at a campground — Don’t like camping? Not a problem. Ocean Lakes Family Campground rents houses inside the campground to vacationers. They’re cheaper than if you rent a house on the beach anywhere else. Ocean Lakes is the top RV Park in America so it is chock-full of things that you would find at a beachfront hotel — and more. There’s nearly a mile-stretch of pristine beach for the use of campground visitors, a two-acre Recreation Center, several pools, mini-golf, a skate park, a marine life Nature Center, freshwater lakes for fishing, and more. [caption id="attachment_4311" align="aligncenter" width="320"] 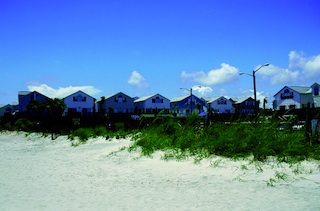 Ocean Lake Campground[/caption] Get and use coupon books — When you get to town, be sure to spend 15 minutes at the Myrtle Beach Chamber of Commerce at 1200 North Oak Street, in downtown Myrtle Beach. It’s where you’ll find free coupon books that will cut your costs for water parks, attractions, live shows, restaurants and more. The Monster Coupon Book is a must, but don’t overlook the other coupon books or guide books like Sunny Day and Myrtle Beach Guide that are packed with coupons and great deals. [caption id="attachment_4310" align="aligncenter" width="320"] 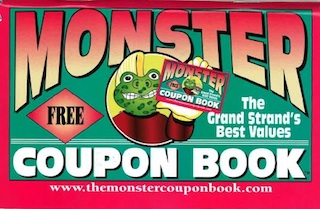 Monster Coupon Book[/caption] Take in the free entertainment — Soak up the free entertainment at Broadway at the Beach. Stages all over the complex have various types of free entertainment going on every night. The nightclub district, Celebrity Square, hosts free concerts Thursday evenings and has a live DJ on Friday and Saturday nights. Monday, Wednesday, Thursday, Friday and Sunday evenings, families can enjoy the “Bryan Dangerous Comedy Show” which features comedy and juggling set to high energy music. Monday and Tuesday evenings, Mr. Nigel & Friends stages his popular musical shows just for kids. Until July 17, a free LEGO® Summer Brickation is open and you can build your own LEGO creation, as well as see some great lifesize displays. Every Tuesday, Broadway at the Beach has an awesome fireworks display at 10p.m. Add in strolling entertainment with a few more surprises and there’s something for everyone. Free. [caption id="attachment_4309" align="aligncenter" width="320"] 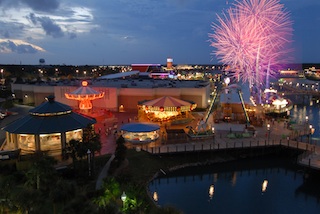 Broadway at the Beach[/caption] Take advantage of wristband deals — What’s a trip to the beach without a visit to the amusement park and the water park? You can do both for less if you know how to shop. Rather than paying a premium price for each attraction, head to Family Kingdom, Myrtle Beach’s only Seaside Amusement Park and Water Park and get their two for one wristband. You can use the wristband for both parks on the same day or go to each park on different days. The choice is yours. For only $35 plus tax, you can have two days of non-stop fun. [caption id="attachment_4308" align="aligncenter" width="320"]

Family Kingdom Water Park[/caption] With all the money you’ve saved by doing the free and discounted stuff, you should have enough left over to treat yourself to a birds-eye view of Myrtle Beach. A helicopter ride costs much more in many places than the bargain price $20 offered by Helicopter Adventures of Myrtle Beach. You can even hop a free shuttle from Broadway at the Beach to the launch site.