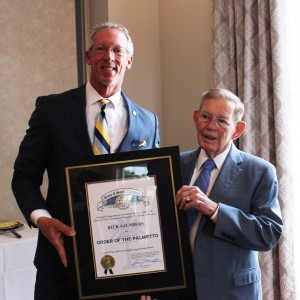 The Order of the Palmetto is the highest civilian honor awarded to citizens of South Carolina for extraordinary lifetime achievement, and for national or statewide service.  The Order of the Palmetto is a once in a lifetime achievement.  South Carolina State Senator, Hugh Leatherman, presented the Order of the Palmetto Award to F.R. “Rick” Saunders on behalf of Governor McMaster at a luncheon on Friday, March 15th at the Florence Country Club. “I am honored to receive this recognition,” said Saunders.  “Early in my career I made the commitment to be involved in the communities we do business in and try to truly make a difference. I was fortunate to expand that to the State level as the bank grew and more opportunities arose.” Some of the highlights of Mr. Saunders career include an appointment by previous Governor Mark Sanford to the South Carolina State Board of Financial Institutions where he served a twelve year term. On the board, he led efforts to restructure the responsibilities of the State Banking Commission and worked closely with legislature to accomplish this. He also served on the State Chamber of Commerce Board and the South Carolina Bankers Association Board both of which are State focused organizations. Mr. Saunders has also served on over a dozen other local and regional boards since the formation of First Reliance Bank in 1999. The bank’s purpose is ‘to make the lives of our customers better.  Mr. Saunders leads a team of associates who are deeply committed to this brand promise donating over 1,000 volunteer hours of service annually. The bank serves hard-working Americans and lends local deposits to businesses and residents of our communities over $100 million annually which helps them accomplish their financial goals and fuels economic growth for our State.  The bank has also built a robust mortgage business division that has funded over a one billion dollars in mortgages for South Carolinians to purchase their dream home. The bank also has several philanthropic programs in place.  They support the underbanked and unbanked population by providing them with banking services and “Reagan’s Promise” which is an initiative just under way that will focus on Foster Care awareness, something the Saunders family remains passionate about since the adoption of their two daughters. For his leadership and work, Mr. Saunders has been recognized for other past awards such as an Entrepreneur Award for his contributions to the prosperity of the Pee Dee Region by the Florence Darlington Technical College, Business Man of the Year by the Florence Chamber of Commerce, The Beta Gamma Sigma honoree from Francis Marion University School of Business and The Ernst and Young Entrepreneur of the Year national award for the financial industry. First Reliance Bank was recognized by The Institute for Extraordinary Banking™ with a Banky® Award for their commitment to strong community banking. This recognition is given to the top 1% of 6,000 community banks across the country. “First Reliance Bank has a strong business model built around the concept that there’s more to banking than money.  It is my honor to continuously contribute to the betterment of our state and our communities,” said Saunders.

8 Ways to Protect Yourself From Identity Theft and Hackers

How To Improve Your Credit Score